Tomb of Hafez is a mausoleum complex located in the north of Shiraz, Iran. It houses the tomb of a world great poet, Hafez Shirazi where its devotees, admirers and tourists pay a visit every year. Hafez or Hafiz is known as one of the most important influencers on Persian poets who is also well-known in the world. He is most famous as the composer of some glorious, technical and exquisite poems. Later in this article, we tell you the reasons for him being so famous; stay with us. 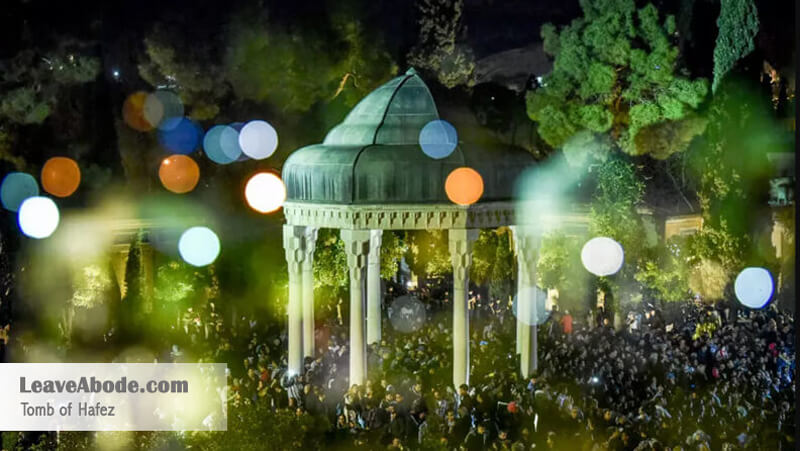 The Tomb of Hafez is located in a tranquilizing garden in the center of Shiraz.

During his lifetime, Hafez's poetry spread to other lands such as India, Arab countries and Turkey where the poets tried to use the features of his poetry to produce their own.

In the eighteenth and nineteenth centuries, his poems were translated into European languages ​​and his name spread to the world. It is interesting to know that Goethe; the German poet was inspired by Hafez’s attitudes. Goethe later translated Hafez’s Divan into German.

You may also like to Read: Why Visit Tomb of Saadi Shirazi? 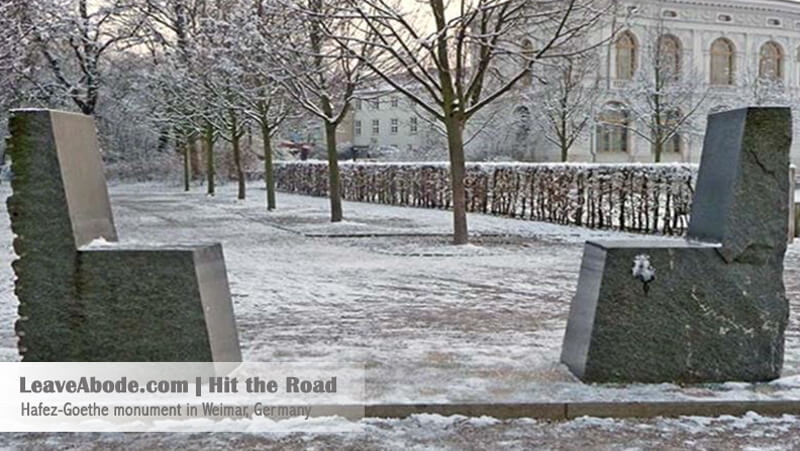 Nowadays, this great Persian poet has many fans not only in Iran but from all over the world who pay homage to his tomb every year. The peaceful ambience of the mausoleum where the fragrance of the orange trees spreads everywhere is an exceptional experience that should not be missed in a visit to Shiraz.

Hafez or Hafiz (Khajeh Shamsuddin Hafez Shirazi) the popular Persian poet was born in Shiraz in the 14th century and passed away 65 years later. It is said that as a teen, Hafez was working in a bakery but later as an adult, his reputation had caused the rulers to interact with him. 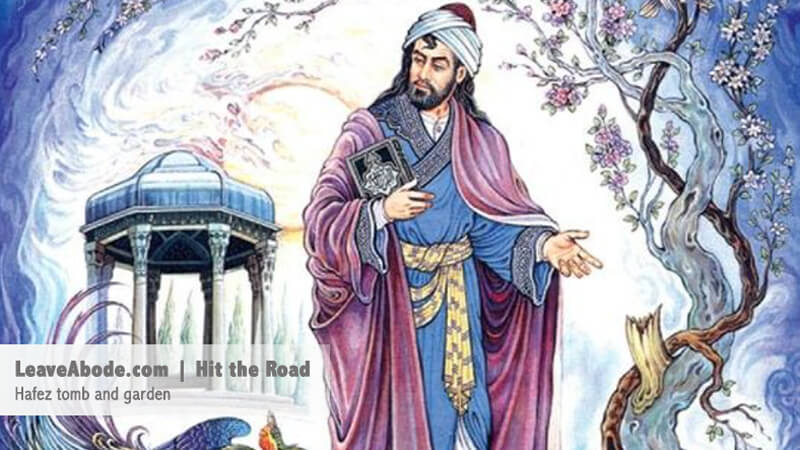 A tentative portrait of Hafez Shirazi

He never belonged to the Sufi or Dervish groups as the movements of his historical period. This great poet of all ages has his own specific attitude toward life that made him unrivalled. His statements about wine, sin, music and pleasure are metaphorically interpreted as an elaborate code of transcendent symbols. He did not consider any sin heavier than hypocrisy and always attacked the hypocrites and the religious authorities in his poems. Hafez's school is “Rendy” as the most essential term in his poetry; hence, the cognition of Rendy results in the cognition of Hafez's intellectual and philosophical attitude. 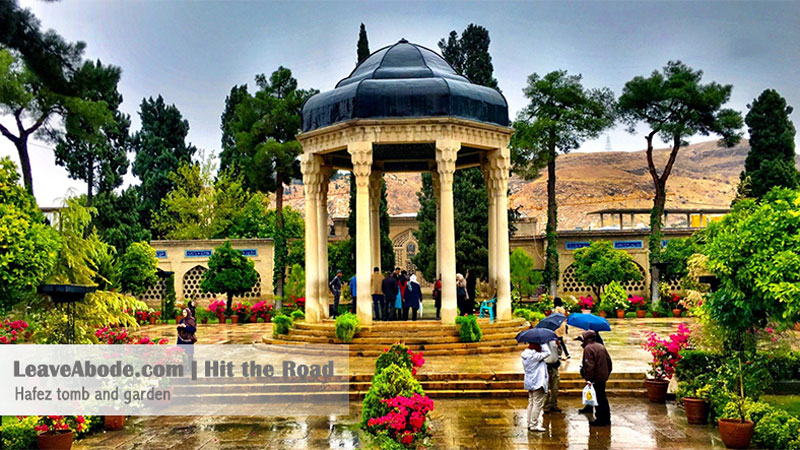 Most scholars believe that Hafez brought Persian lyric poetry to a peak that was never repeated. The scholars believe that the most prominent feature of Hafiz lyric style is the independence and non-connection of the verses: each verse raises a separate issue. Hafez, with his constant changes in imaginative forms and themes, causes us to imagine that the subject of poetry is constantly changing, while this may not be the case.

You may also like to Read: Eram Garden of Shiraz, a UNESCO Registered. 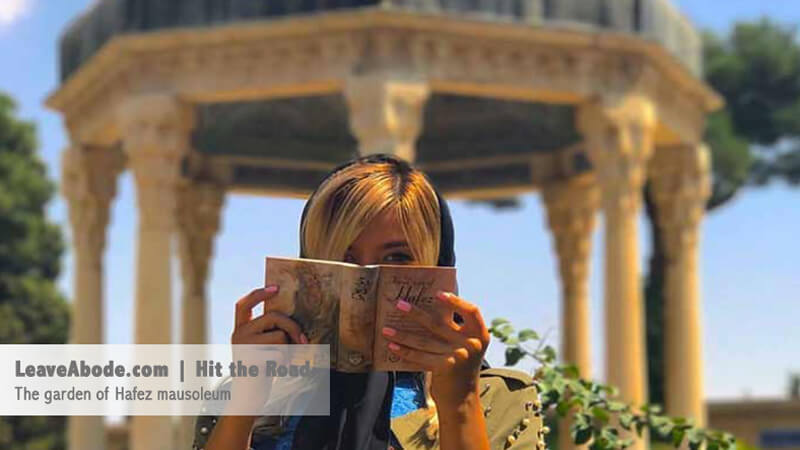 Hafez poetry collection is a common book in every Iranian's home. Fortune-telling with Hafez Divan or Fal-e Hafez (roughly translates to ‘divination via Hafez’), is a common tradition among Iranians. It is consulting the poet for questions about the future and guidance in difficult decisions and dilemmas.

Iranians hold a book while divining and utter the following sentence or sentences: “O Hafez Shirazi, you are the revealer of every secret, I want you to tell my fortune.” Then they open the book, read and interpreted the lyric on the right page. If the theme of the poem is positive, the omen is considered good, otherwise, it is considered bad.

You may also like to Read: Easiest way to get Iran Visa to visit Hafez Mausoleum

The architecture of Hafez Mausoleum 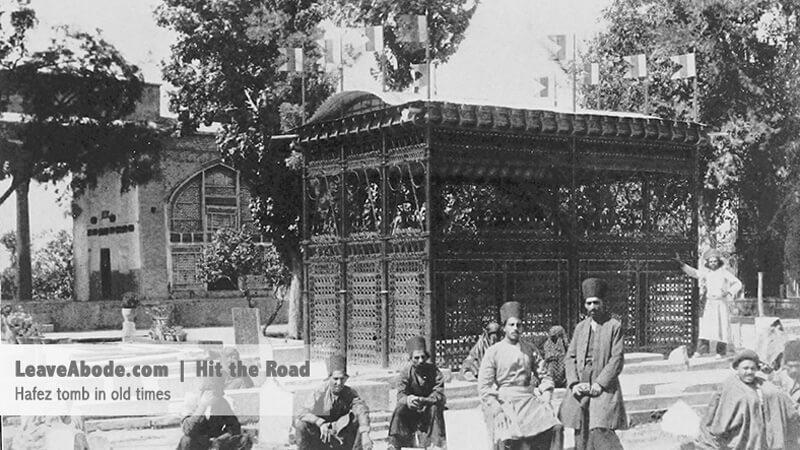 Tomb of Hafez during time

Hafez mausoleum was renovated during the reign of Shah Abbas of the Safavid dynasty and a marble stone was placed on his tomb during the Zand era. Finally, the French architect Andre Godard designed the current mausoleum for Hafez. He had a special interest in Iranian culture and art and spend 32 years of his life in Iran.

This complex has an area of ​​2 hectares and two north and south courtyards, which are separated by a hall. To enter and exit this complex, you can use 4 gates in different parts of it. The main is located on the south side of the complex, and apart from that, there are two doors in the west and one in the northeastern part of the complex.

You may also like to Read:  Comfortable Airport Transfer in Iran

Why one should not miss visiting tomb of

As an important figure in the Persian culture and literature who is widely known in the world, the tomb of Hafez is one of the most important monuments in Shiraz. 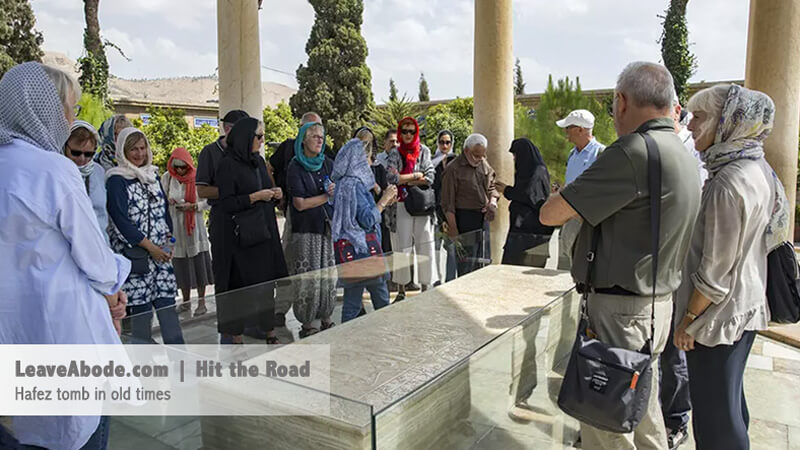 Other than the importance of Hafez, the architecture of his tomb and garden has an unparalleled impact on you. It is a pleasant garden with an atmosphere of peace and tranquility that is a romantic place for lovers to meet. In fact, the most beautiful part of your trip to Shiraz is the time that you will spend in this mausoleum. In terms of architecture, each part of this complex is a work of art. You will see people here and there reciting poems. The smell of orange trees, large rectangular ponds, streams, and flowers mesmerizes you. It seems that the mausoleum of Hafez, like his poetry, is delicate and sensitive.

Andre Godard, who designed the current monument used the unique features of Persian culture to give more meaning to it: 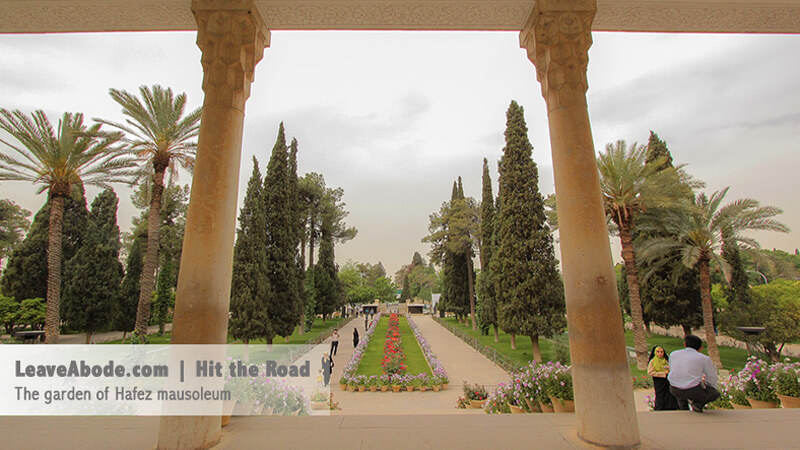 The garden of Hafez mausoleum

Hafezieh is located in a busy street from where you cannot see the tomb of Hafez. This symbolizes leaving the material body and traveling to the spiritual world. The designers tried to show that to know Hafez you must get out of the hustle and bustle of the world.

As soon as you enter, there is a beautiful garden, a symbol of the seductive world. The porch after the garden is a symbol of death and entry into the afterlife world. Climbing up the stairs, it is as if your soul is flying toward the sky.

You may also like to Read: Nasir al-Mulk, the Incredible Pink Mosque 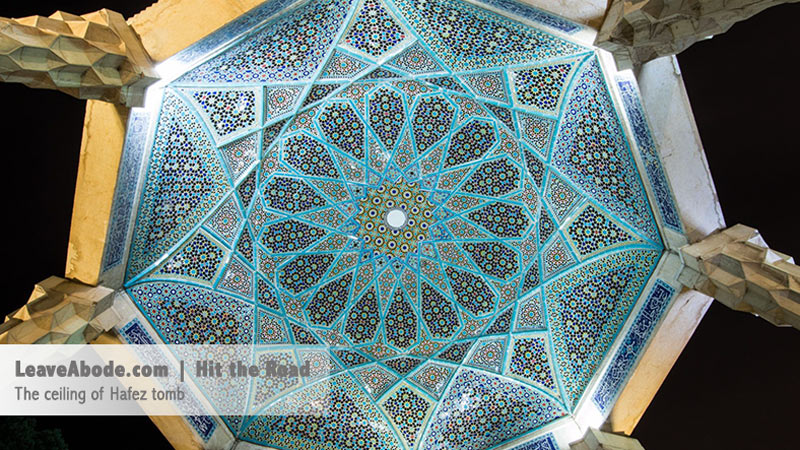 It can be imagined that after death and seeing the reality of life, man becomes calm. The northern section of Hafez mausoleum is much simpler in design that brings to mind the tranquility that awaits every human being after death. There are 8 entrance and exit doors, the tomb also has 8 columns. The number 8 probably indicates the year of Hafez's death, ie the eighth century Hijri, or the eight gates of heaven.

A poem by Hafiz

Last but not the least, read A poem by Hafiz:
With last night’s wine still singing in my head,
I sought the tavern at the break of day,
Though half the world was still asleep in bed;
The harp and flute were up and in full swing,
And a most pleasant morning sound made they;
Already was the wine cup on the wing.
‘Reason,’ said I, ‘’t is past the time to start,
If you would reach your daily destination,
The holy city of intoxication.’
So did I pack him off, and he depart
With a stout flask for fellow-traveller.

Don't forget to book a tour to Tomb of Hfez

How to get to the Tomb of Hafez?

The best way is to take part in the Shiraz Garden Tour or Shiraz City Tour of Leaveabode.

Where is the Tomb of Hafez located?

Hafeziyeh is located south of Quran Gate in Golestan Street in the central part of Shiraz, Fars province.

When is Tomb of Hafez open?

The required time from this tomb is 1 to 2 hours.

Holidays for Tomb of Hafez?

The dates may be changeable so get in touch with us for recent information.

When is Hafez commemoration day?

20th of October every year, a commemoration ceremony of Hafez is held in his tomb in Shiraz with the presence of researchers from all over the world.

Day Tours Near Tomb of Hafez

Attractions Near Tomb of Hafez 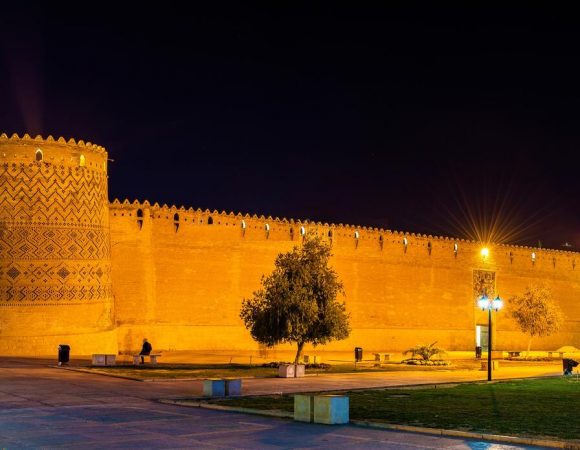 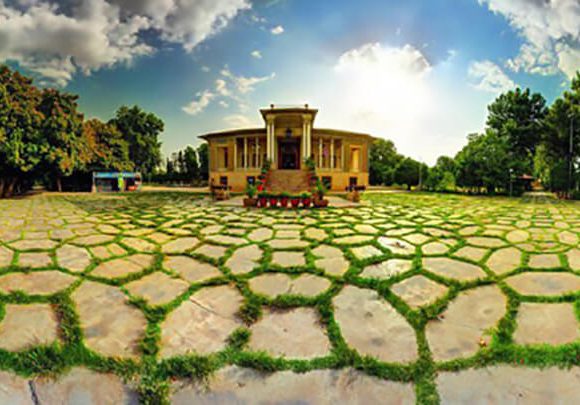 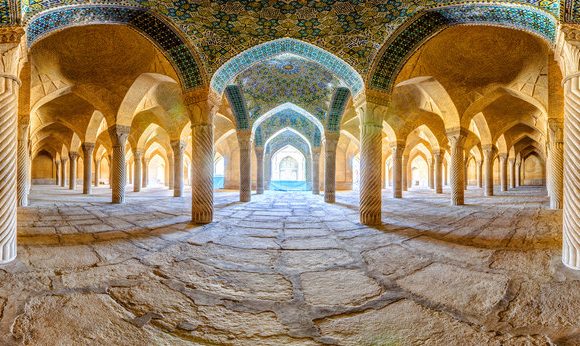 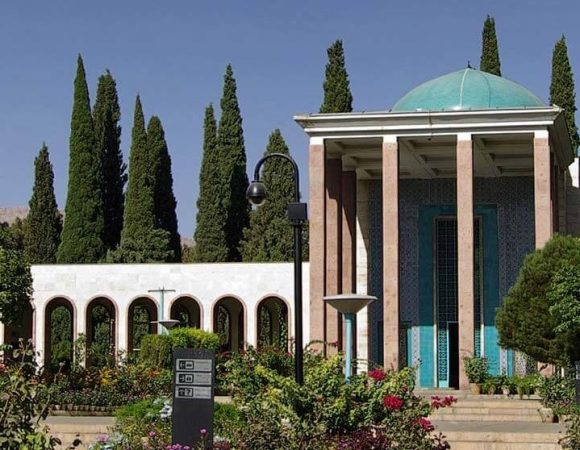 Tomb of Hafez on Map

2 thoughts on “Tomb of Hafez Shirazi”